What is the National Institute of Advanced Industrial Science and Technology?

The National Institute of Advanced Industrial Science and Technology is one of the largest public research institutes in Japan, conducting research in six diverse fields: environment and energy, life sciences, information and communications and electronics, nanotechnology, materials and manufacturing, measurement and measurement standards, and geology that support Japanese industry.
Headquarters are located in Tokyo and Tsukuba, and each of the eight locations in Japan, excluding the Tsukuba Center, has a regional center focusing on distinctive research.The total number of employees is about 3,000.More than 2,000 of these researchers conduct organic collaboration with industry, universities, and government simply as they work together with industry, universities, and government, based on the “Open Innovation Hub” initiative that integrates organizations, human resources, and systems, and develops from research and development to innovation.
(From AIST website)

The good thing about QAM is the helicon cathode.

For the study of PCRAM, we have been using a high vacuum sputtering device (MPS) made by ULVAC since around 2007, but in the study of equipment addition becomes high frequency of use, I was allowed to purchase a sputtering device made by ULVAC with a connection.
The sputtering device (QAM) that I purchased this time is equipped with a helicon cathode of the existing device (MPS), and the performance side is the same, and I am glad that it is scalable.The next time you say you want to do something, you can expand it.
Compared to MPS, the sample work time is now 1/3 because it is automated (controlled as in production facilities).I also feel that operability has improved compared to albach’s deposition equipment.Target exchange is also easy.Now, women use it in the field, so if you think it’s easy to use, it’s a good device.
Since the superlattice film was made using a helicon cathode source until now, I am very happy to be able to make it with a helicon cathode this time.

What’s good about the Heliconcathode?

In a normal sputtering device, the distance between the substrate and the target is 40 mm to 50 mm, and a portion of the plasma is exposed to the surface of the substrate.However, since the heliconcathode is equipped with an antenna that is a plasma stabilizer, it can be placed far away from the substrate (150 mm), making it difficult to be affected by plasma.Therefore, we believe that helicon cathodes are the best way to produce atomic flat films other than MBE (electron epitaxy).

I’ve heard that the results of the Nobel Prize class are coming out.

It seems that the technology of solid phase change memory under development is worth the Nobel Prize.There is no data that surprises you like.A magnetic resistance (MR) effect of more than 2000% has been achieved over a temperature range of about 150 degrees Celsius from room temperature.Of course, almost the same data can be reproduced in QAM.
It is a natural harmony technology that successfully deceives the “Maxwell’s devil” that comes out of the switch current characteristics in thermodynamics and makes it as small as possible, but a new discovery called “topological insulator” has been added to it.I think this is why people are paying attention.

Why are you involved in this research?

Why did you decide to study at AIST?

As for my personal story, I graduated from a master’s degree and got a job at TDK.At first, I was researching media for thin-film hard disks, but I decided to study at Cranfield Institute of Technology in the UK under the company’s study abroad program.
After Returning to Japan, I started researching phase-changing optical discs (rewriting types) and started to commercialize them, but after that, I also had other things i wanted to do, so I decided to join AIST, which I was recruiting researchers for at that time.
When I was studying abroad, my teacher in England told me not to write a paper in words that I don’t understand (Japanese) while my eyes are black.And, two or three papers a year can be written.I continued my research for seven years, and the number of papers increased, and there were about 100 patents, including overseas.I think that it was evaluated and it was able to enter.I owe it to my teacher.

At the beginning of the program, there were three members who started a new research group.
For the first six months, I was reading the literature, and what I noticed was a research that led to the IBM Award.

Can you ask about your research stance?

First of all, I read the paper thoroughly.Find contradictions and blind spots by reading them. And I think through it.If it is not good in the way and the theory up to now, it is surely useless even in the positive attack method.If that’s the case, all you have to do is look at things from a different direction and find a way to solve them.It is not good if it is not in accordance with the theory, but if it is understood that it can be overturned with the technology which can be confident as taught in the school, it is possible to break through if it advances there.
I also experiment with it myself and try to believe only those that are clearand and confirmed.For example, in the past, when I had students, I sometimes came to the laboratory on Saturdays and Sundays to check the data that students had produced.It’s not that I don’t believe in students, but that I always have to see them with my own eyes.

I’m often asked by you, but I don’t really like research.I feel like I’m continuing my research to eat in order to live (laughs)
But God imposes things that he doesn’t like.Only those who continue to run away because they think they don’t like it, they say, “You have to do it now, you can’t!I feel like God is saying.So honestly there’s no place that’s interesting (laughs)
If it doesn’t work out, I’ll go home and drink yake, and if something good is good, I’ll drink it and say it’s good… this repetition!
I wonder if this is my research life. 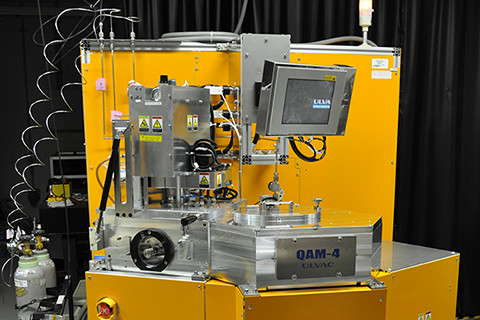 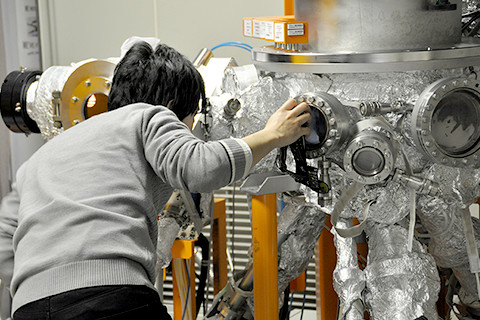 Flow as an ULVAC user

I have been with ULVAC for more than 15 years.In the TDK era, we used inline sputtering equipment.Ultra-high vacuum equipment is the beginning of the relationship with ULVAC.
In the old days, albach equipment was the impression that it lacked usability even if it was cool as thick, but the QAM introduced this time became a smart and sophisticated design.I think that it is a design that is very easy to use.

The color of QAM was designated as a colorful color (Yamabuki color) but .

When I was studying in the UK, the equipment was red or orange and the color that looked good in my laboratory.Because it is a bright color, it is safe without putting it on the head.Because there is no factory-designated color at AIST, I was allowed to specify it as a Yamabuki color.

These are people with technical capabilities who can realize everything they asked for this.It’s really amazing that you don’t say “I can’t.”
The heliconcathode is gone from the lineup, but I want to make a superlattice film with a heliconcathode.I really appreciate that the enthusiastic person in charge granted my wish. 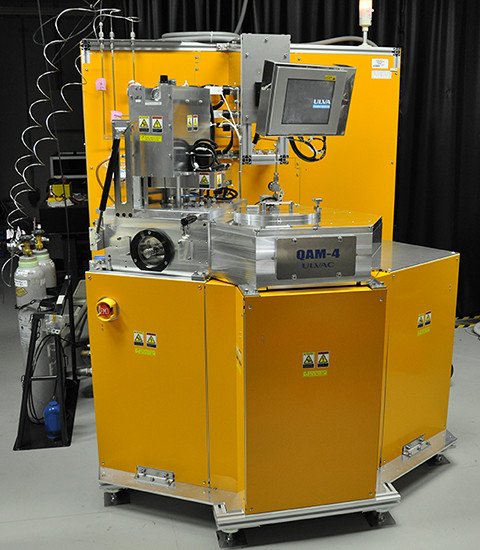 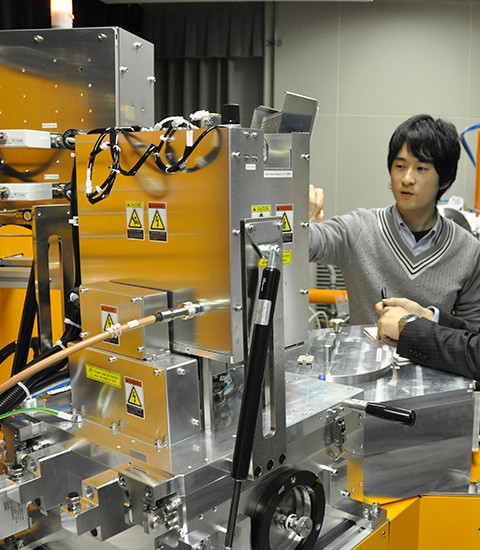 It’s great when the experiment doesn’t work out and you’re stuffy!
If you don’t take a breather somewhere, your research position will be tough.When I got the IBM Award, I bought a VOLVO with a big radio control.I’ve been using it for about 10 years now, but it doesn’t break easily.Such a machine is a feeling springs.Because it is easy to use, I have been using it for a long time.

I was a humanities circle (physics lovers’ association), but the high school baseball club was so strong that I couldn’t pay for the club.That’s why I used the New Year’s ball to make solar furnaces and many other things.That’s why I don’t like baseball (laughs)
But I fell in love with baseball only once when Hanshin won the championship in ’85 when Bath was there.The uniform of the vertical stripe was good, and it became a Hanshin fan.
But I still hate baseball!

Based on ULVAC's abundant film forming technology and experience cultivated so far, it is a device that can respond widely.

Achieved miniaturization while providing versatility and expandability! The process chamber and exhaust system can be freely combined according to the application.

The Secret Story of QAM's Birth 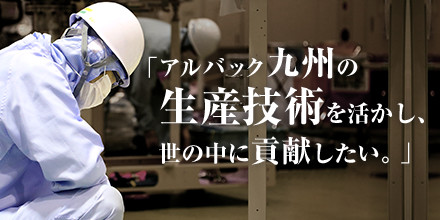 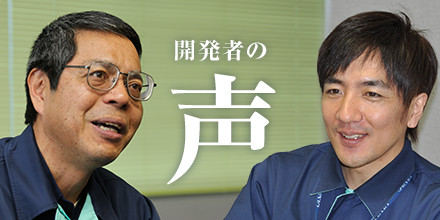 Click here if you are looking for various vacuum equipment

The high-density optical recording device is a fundamental technology for information technology, and it is strongly expected that higher density is realized. Higher density is achieved by focusing light on a smaller spot on an optical disc and reading out recording marks with a smaller area.However, conventional optical systems reduce the size to about the same as or smaller than the wavelength due to diffraction restrictions. Could not be narrowed down. Dr. Tominaga has established a foundation for highly practical near-field optical recording technology by developing a unique method of using near-field light and applying it to optical recording.

Near-field light is formed at the tip of a fine needle probe formed at the end of an optical waveguide, etc., and it is possible to narrow down the light to a small spot of several tens of nanometers, one digit smaller than the wavelength, without diffraction restrictions Therefore, it has become a powerful tool for observing microstructures below the diffraction limit and evaluating optical properties. If this is applied to optical disk recording, there is a possibility that the recording density will be drastically increased, but since the probe must be brought close to the disk surface, there have been difficulties in terms of impact resistance and high speed. Dr. Tominaga overcame these difficulties by inventing a very original method in which the probe portion was separated from the optical waveguide and self-formed by the irradiation light itself on the optical disk to be irradiated. That is, the irradiation light is narrowed down to the mask layer formed on the disk, and an opening or scatterer remarkably smaller than the irradiation spot is reversibly formed by using the nonlinear effect, and this is generated / scattered by the near-field light. Function. He demonstrated that this method can be applied to a real optical disk system by searching for materials suitable for probe self-formation and optimizing the disk configuration. This gives prospects for the development of the optical disk storage capacity to the terabyte area.

We have also demonstrated that this near-field light utilization technology can be applied to lithography technology.Furthermore, the possibility of signal enhancement by the surface plasmon effect and the effect of near-field interaction between minute recording marks, etc. The discovery of new and interesting phenomena has given clues to the diverse development of this technology. These achievements are significant in that they show the possibility of extending optical technology to a fine region of 100 nm or less, which was considered to be almost impossible with conventional optical technology.